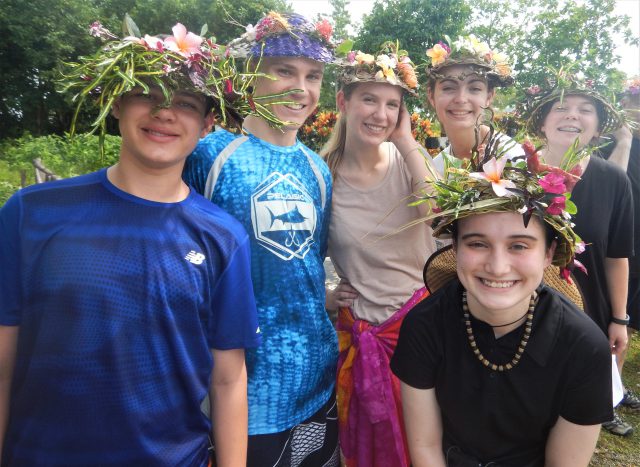 During the holiday break, 21 students from Year 10 and 11 along with 4 staff and 1 Council member had an experience to remember in the Solomon Islands for the College’s annual mission trip.

The College first visited the Solomon Islands’ Western Province in the June/July break of 2008 after the area was devastated by an earthquake and tsunami in 2007. Since then strong contacts have been established with many schools and communities throughout the region.

In the last few years the trip has been extended to include an introductory phase in the capital of Honiara where groups meet with various NGOs to find out what problems the community faces, what they are doing about the problems, and what can be done to help.

After leaving Sydney at 6am in the cold of winter, the group arrived in Honiara in the afternoon to an unusually ‘cool’ 26 degrees.

Their first few days were spent meeting with groups dealing with widespread problems of youth unemployment, adult literacy issues and translating books such as the Bible into local dialects, how people with disabilities survive in a town like Honiara, and the issue of domestic violence. The group heard from some very powerful speakers who were passionate about the work they do.

The group also enjoyed seeing a project developed by the Islanders themselves that saw local communities use every part of a coconut to produce items sold around the South Pacific and in Australia. This has brought wealth to villages that can now provide work for their youth and education for younger ones.

After leaving Honiara, the group then set off for their first stop in the west – Munda. They visited an early learning centre where the teacher, who is not trained, was doing an amazing job with very few resources. This was also the start of a regular part of every visit – where students lead games and activities with the local children. Materials were also given to each school they visited – sporting gear, stationery collected by our junior School, exercise books and reading books for the early learning centres.

From Munda the group travelled further west to Gizo and then north-west to spend 2 nights in the village of Varese where they slept on the floor of classrooms under mosquito nets. For many students, the visit to Varese and a nearby village of Malasova was a highlight. The interaction with the locals was amazing. They demonstrated a deep faith and a true love for others and the group felt welcomed from the moment they arrived, with leaving a little difficult for some.

Back in Gizo, the group again visited the schools the College had first visited in 2008 and strengthened the College’s ties to them. While visiting the schools in the west, there was also the chance to distribute solar panels and lights donated by Warren House.

On Tuesday 11 July, the group returned to Sydney: tired, but also exhilarated by their experience.